My first connection to CGI was made in a little computer-game store in the middle of the world’s biggest shopping mall. A small white box and color monitor was sitting on an endcap display, playing a looping demo video. I was drawn like a moth to the burning radiation of the monitor - mouth likely agape.

Having just completed a “PC Applications” computer course, I was shopping for a “Personal Computer” to put my learning to use. The main things discovered at school were that I hated MS-DOS, Lotus, Microsoft, PCs and monochrome PC monitors. My educated choices boiled down to whether to buy green or orange on black PC text display. 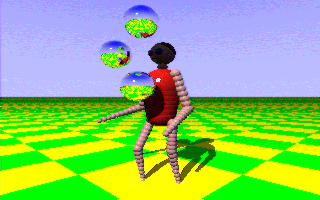 There in front of my eyes was an eye-popping color blast of a scene. Like seeing color broadcast television for the first time, the color computer was an amazing jump in viewing experience. But there was more - this red-shirted robot was moving; a 3D animated body with moving arms and legs - juggling balls! Looking closely,there was more - the juggled balls were reflecting like chrome, showing the entire scene in their arc.

I dare say it: I saw my future reflected in those three chrome balls.

The computing unit they emanated from seemed like a cross between a computer and a game machine. No sign of monochrome Lotus or Microsoft, and there was a very cool user interface. Best of all: there were non-computer things such as color video and stereo audio output plugs in the back. This “computer” could plug into your VCR input and thus big screen 26” RCA TV.

The little white box that tilted my brain was a Commodore Amiga 1000. The Juggler animation was created on the same model, featuring scene ray-tracing with just 512K RAM.

Though I had no way to pay off the debt next month, I charged up $1800 worth of hardware and software on my American Express card. No experience; no cash; no worries: I was in business.

Just because you can buy technological power to put in your hands, does not mean your brain can catch up to your wallet. Pretty much everything digital was a new experience to everyone - learning was full time while you worked full time. My learning pace could only progress at the Amiga’s 7.14 MHz computer clock speed.

While I owned the first PC 3D animation software - Aegis VideoScape 3D and 3D Modeler coded by Allen Hastings, it was too much virtual mountain for me to get over the conceptual and dimensional hurdles.

Though the manuals are flood damaged, I still have the original disks and an Amiga; I will boot up for another look another day to see if my attitude and aptitude has changed with age and experience.

The Amiga provided the market’s next major 3D upgrade within the famous NewTek Video Toaster and Lightwave 3D. I somehow figured out how to create 3D logos for corporate videos and commercials, but without training and fast gear, learning was slow as MHolassez. Rendering fairly simple animations often took upwards of 2 hours per frame, so I was limted to short run work and little time for experimentation.

A misplaced object or bad light placement in the scene meant another day with the computer lost on rendering.

As a small business owner, there seemed little possibility for training and gaining at the same time. I could not learn to animate fast enough to even pay thousand$ for continuously newer-faster processors and bigger hard drives. To make ends meet I worked on and learned other, less fun things with more immediate financial reward.

To learn more about the computer animation industry, I took a low-paying job at a small Commodore Amiga retail shop. I didn’t know as much as the folks I was selling to, which was awkward - but very soon I had scoped out all of the video production companies in the region.

They were able to think in 3D and use the tools provided in Lightwave 3D to make unreal things look real.

Within months of this career shift though, Commodore went bankrupt - killing the product line and future of the Amiga. We plodded along by buying and selling used Amiga gear, until one day I got fired for forgetting to put a user manual in a used computer shipment.

Nobody used Amiga manuals. They were designed intuitively enough that you didn’t need to think too hard; perfect for lazy-brain me. This mistake not worth getting fired for, but poined out that I was not in the right space.

WHEN THE CHIPS ARE DOWN, BET BIG

Undaunted, I realized starting small at the bottom of the ladder was not for me. My first call was right to the top. Bob Scarabelli was the new President of a company in process of taking Gastown Film & Transfer from private to a public company: Rainmaker Digital Pictures Inc.

As the largest film processing company in Western Canada, Rainmaker was well positioned to take advantage of the Hollywood North filming boom with new digital services.

3D compositing services were drawing big dollars from big film and television projects done locally due to significant cost and culture benefits. The 3D software hardware and software tools of the day were amazingly capable of creating worlds, but worldly expensive.

Brand names like Alias and SoftImage cost in the range of $50,000 per seat in their early days. Training on those seats was challenging and expensive, requiring refridgerator-sized computers from Silicon Graphics Inc. (SGI).

Bob was interested in my $5000 Lightwave 3D (now standalone on PC) pitch for Rainmaker. At 10% the price of the previous generation software and on cheaper PCs, a visual effects company could:

Bob* was also interested in my new Lightwave friends. It only took one phone call to Jim and one to Winston for them to go from my new connection to co-workers and film and television animators.

My career path soon turned away from 3D again with DVD blowing up, but I always kept a version Lightwave on life support. Every so often I fire it up and try relearn everything I forgot again - a frustrating process.

Today Lightwave 3D is still available for $995; upgrade from previous versions are $595. I am always tempted to upgrade (behind a few versions) but I need to remind myself that I have not had time to learn new features through the last few prior versions.

I also need to remind myself that I don’t need to spend ANY money to get capable 3D software online. Many years too late I discovered a very cool 3D program named Blender. With financial limitation removed, the new Jims and Winstons of the world have made incredible strides with animation using this tool. No excuses for me.

EVERYTHING IN THE UNIVERSE IS CONNECTED

The VFX industry has scaled enormously; now it is a cut-throat commodity, doomed to a competitive price race to the bottom. A movie can make a billion dollars, but studios use their leverage and expend great effort to save pennies from suppliers.

Some say the Hollywood business model in some Marvelous quarters creates chaos for artists and creative companies alike. The blood-from-a-rock mentality works good people to death; unfortunately there is an endless supply of willing wannabe victims to follow. That was never going to be me - thank goodness I wasn’t smart enough.

3D modeling is about connecting lines to dots. My early connection to the technology took me to interesting spots, but personal 3D skill level is still shaded by reality. There is ever more to learn, but I can render 4K frames in seconds and minutes now.

My lofty but long-term goal to create a short 3D film made enirely with my own handiwork. Alas, only with in-the-box thinking and solid effort will my 3D worlds will take shape on their own dimension: in TIME. My turn to connect the dots awaits.

{*I never really thanked Bob Scarabelli enough for picking me off the corner and hiring me to help turn analog film ino digital pictures. “Shaping the image” was his message, which shaped the whole city of Vancouver into a film destination. Bob passed away in 2004 while riding a bicycle in the park. RIP; will have to pay my thanks forward.}