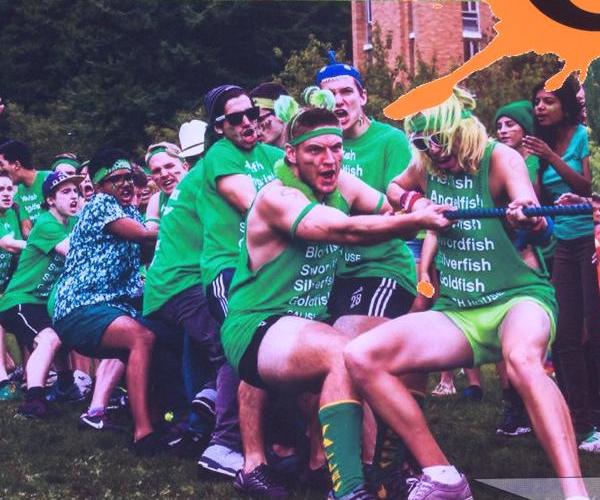 That's me in the blue shark hat

When I was a Residence Advisor back at UBC, I received all kinds of coaching and advice about how to become a better leader. One piece of information has stuck with me ever since: the idea that for every negative interaction you have with someone, you need to have 5 positive ones to offset the negative one.

As a residence advisor, it was easy to find yourself in the middle of a negative interaction. Often they were minor infractions, “hey, don’t smoke so close to the building” or “you’re being too loud, please be quiet”. Occasionally they were major, requiring a proper “Incident Report” to be written up. Regardless of the scale it was immediately noticeable that after the negative interaction, tension between you and the other person involved persisted.

Even after just a few interactions, relations between you and an individual can quickly sour. After a few more, you will find yourself in the territory of no return where this person instantly assumes you’re only going to say something negative to them and in return they treat you in an unfriendly manner. This then subconsciously irritates you more, causing you to look for something else they’re doing wrong.

Whether you’re living on residence for a full school year or working in an office environment, conflict of some form is inevitable. You will still see or work with this person for a year or more. Let’s take a deeper look at how 5:1 relationship advice can help improve teams in a software engineering environment.

Applying this to Engineering Management

A “Negative” interaction can be of varying degrees of severity. Some of the examples below are hardly negative in the common sense of the word. However, I would argue that smaller interactions can often compound into a situation where the receiving person eventually feels unmotivated or underappreciated.

As a leader, you are often the one delivering difficult news or feedback. Perhaps someone isn’t getting the promotion they were hoping for, or you have some constructive feedback for how they can be a better teammate. These are the big and obvious moments where it is clear that decisions or feedback will be hard for the other person to receive.

In software, a code review can be riddled with all kinds of feedback, often exclusively constructive. A pull request may have taken a full day to put together, only to have the reviewer make requests to change every other line of code or completely refactor how it was done. In some environments, your only interaction with a team member may be through code review. Which means the reviewee is left constructing a personality for the reviewer based on the way they comment on the code.

Someone may be excited to use a new framework, library, or coding pattern in the codebase only to be told they can’t because it doesn’t fit with existing conventions. Or they might be asked to work in an area of code that is tricky to understand and modify.

It is incredibly important to follow up on that interaction in the coming days and weeks with positive ones to re-establish equilibrium of the relationship. This will help form trust on both sides and once the other person remembers that your sole purpose isn’t just to be critical of them, they will become more receptive to the feedback you have given them.

Positive interactions in any environment are tricky, but I particularly find it difficult to incorporate in a software engineering environment at the required frequency to offset negative ones at a 5:1 ratio.

This is one of the areas where working in person really takes the cake. It is much easier and more natural to bump into a colleague and ask them about their day, see how their family is doing, or crack a joke that makes both of you laugh. Some people label this as small talk and believe that it is a waste of time. In my experience, it’s only a waste of time if you believe it is. If you’re asking the questions just because you’re following some kind of script, then yes, it will probably be a waste of time. When you truly start active listening, a topic for another time, you’ll get a more accurate picture of who the other person is and what makes them tick.

In a remote environment, these interactions need to be a lot more intentional. A direct message inviting some conversation, taking some time before or after a meeting to intentionally not talk about work related stuff, or publicly praising the work of an individual in a retro or company-wide channel.

One on one meetings аre another incredible tool for boosting your positive interactions with an individual. Instead of using them only to provide constructive criticism to an individual, make sure you’re checking in on the person. If you hired the person, hopefully you did some form of interview to confirm that they are likable and have the skills you are looking for. If suddenly they aren’t performing at a level you expect, often there’s a deeper explanation. Understanding the situation and working with the individual to identify what is going on is key for both of you to exit the conversation feeling better than you entered it.

Over the next week, try having an intentional positive interaction with each person on your team. You’ll be surprised how good it feels and how much it helps forge the relationship with your colleague.

Finally, while this article focuses on applying this to software engineering, this principle applies to all relationships. Think about your partner, family, friends, or neighbors. Are you hoping any of these relationships could feel less tense? The simple secret is that just by boosting the number of positive interactions you have with someone, you will likely mend those relationships and have more fulfilling time with the people in your life.